Ginkgo Biloba is one of the oldest living trees, dating back to more than 200 million years. It has been traditionally used for memory and thought problems, anxiety, vision problems, and many other conditions. Ginkgo is associated with several uses, most of which focus on brain function and blood circulation. This herb used to treat altitude sickness (prevention), cerebral vascular insufficiency, cognitive disorders, dementia, dizziness/vertigo, memory loss, premenstrual syndrome (PMS), SSRI-induced physical dysfunction, and as a vasodilator [medications that open (dilate) blood vessels].

What are the synonyms of Gingko Biloba?

Ginkgo Biloba can reduce symptoms of anxiety due to its antioxidant content. Ginkgo has high levels of flavonoids and terpenoids, compounds which are known for their potent antioxidant effects.

Ginkgo has anti-inflammatory and antioxidant properties. Ginkgo can help reduce headaches or migraines caused by excessive stress. Because of its ability to increase blood flow and reduce inflammation, Ginkgo may be an effective treatment for headaches.

Ginkgo can reduce schizophrenia symptoms. It may also reduce some side effects like thirst and constipation and other adverse effects.

Ginkgo can increase blood flow by promoting the dilation of blood vessels. Ginkgo has anti-inflammatory compounds present in it, which may help to prevent heart stroke in some cases.

Ginkgo may improve asthma symptoms and other inflammatory respiratory diseases like Chronic obstructive pulmonary disease (COPD). The anti-inflammatory compounds in Ginkgo may allow for reduced inflammation of the airways and increased lung capacity.

Ginkgo may treat physical dysfunction, such as erectile dysfunction or low vitality. Ginkgo may improve blood levels of nitric oxide, which improves circulation due to the dilation of blood vessels. As a result, Ginkgo can also be useful for treating various physical dysfunction symptoms by improving blood flow to those areas of the body. 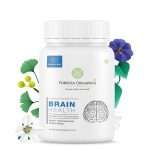 Is Ginkgo Biloba helpful for anxiety?

Some studies suggest that Ginkgo Biloba may improve some aspects of mood, including alertness and calmness, in healthy subjects. It helps you stay more alert and calmer, it may increase your sense of energy. This relatively safe and popular herb is said to reduce fatigue and enhance stamina and endurance.

Ginkgo may help treat both the physical and psychological symptoms of premenstrual syndrome (PMS). It may relieve breast tenderness and other symptoms associated with PMS.

Essentially, the herb cannot directly cause hair growth, but it does promote stimulation, which can create a healthier environment for better and faster growth.

Is Ginkgo good for skin?

This information is meant to supplement, not replace advice from your doctor or healthcare provider and is not meant to cover all possible uses, precautions, interactions or adverse effects. This information may not fit your specific health circumstances. Never delay or disregard seeking professional medical advice from your doctor or other qualified healthcare provider because of something you have read on Foresta Organics. You should always speak with your doctor or health care professional before you start, stop, or change any prescribed part of your healthcare plan or treatment and to determine what course of therapy is right for you.